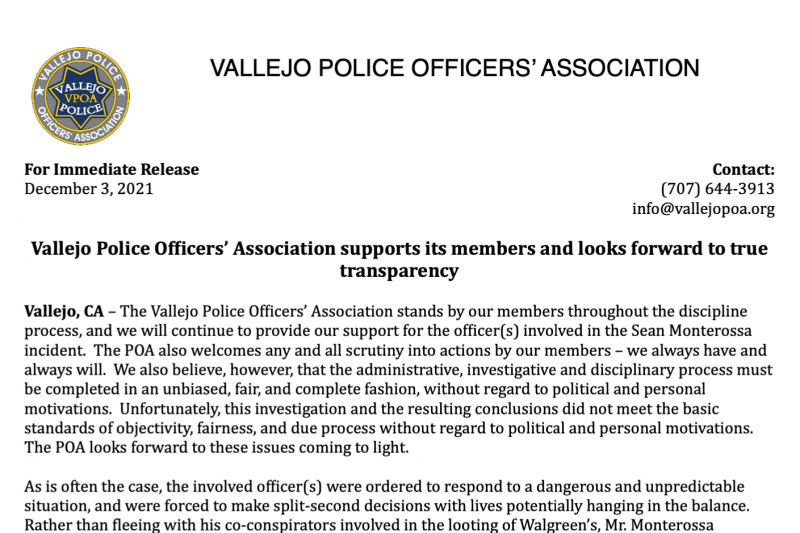 Vallejo, CA – The Vallejo Police Officers’ Association stands by our members throughout the discipline process, and we will continue to provide our support for the officer(s) involved in the Sean Monterossa incident. The POA also welcomes any and all scrutiny into actions by our members – we always have and always will. We also believe, however, that the administrative, investigative and disciplinary process must be completed in an unbiased, fair, and complete fashion, without regard to political and personal motivations. Unfortunately, this investigation and the resulting conclusions did not meet the basic standards of objectivity, fairness, and due process without regard to political and personal motivations. The POA looks forward to these issues coming to light.

As is often the case, the involved officer(s) were ordered to respond to a dangerous and unpredictable situation, and were forced to make split-second decisions with lives potentially hanging in the balance. Rather than fleeing with his co-conspirators involved in the looting of Walgreen’s, Mr. Monterossa shockingly turned toward the officers, knelt down on one knee in a shooting stance, and grabbed an object from his waistband area that appeared to be the butt of a handgun. Any officer or person would recognize these actions to constitute an imminent threat of death or great bodily injury. Despite the politically motivated conclusions of the investigation, the concepts of de-escalation, although valuable, are not the appropriate tactics or techniques when a subject appears to be pulling a gun from their waistband. Officers are not required, nor should they be required, to wait to see the barrel of a gun before they can protect themselves with deadly force. By that time, it is already too late.

The POA is confident that the officer’s actions that evening in response to an imminent threat were objectively reasonable under the totality of the circumstances and we are looking forward to a neutral, unbiased, and apolitical arbitrator to overturn these findings. We also encourage the public to review the investigation materials.

We ask the community to support all public safety and the hard work they perform to keep our community safe everyday. The Vallejo Police Officers’ Association proudly supports all the men and women that serve and protect the citizens of Vallejo.

The Vallejo Police Officers’ Association (VPOA) was incorporated in 1957. The VPOA is the recognized bargaining unit between all Vallejo Police Officers and the City of Vallejo. Members include all ranks of officers – Captains, Lieutenants, Sergeants, Corporals and Officers. The VPOA does not represent the Chief of Police or the two Deputy Police Chiefs.

The business function of the VPOA is to protect the collective interests of the members of the Vallejo Police Department and provide benefits to its members. The VPOA is also committed to the safety and security of the citizens of Vallejo and the protection of life and property.