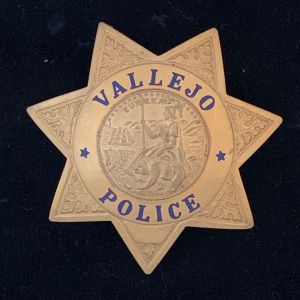 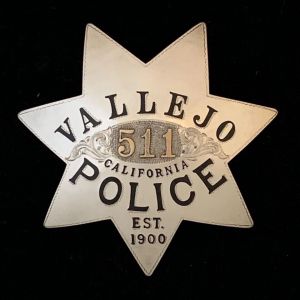 Anniversary Badge
The names and badge numbers listed below are for every sworn officer employed by the Vallejo Police Department.  Badge numbers are assigned when a member is appointed and are issued in numerical order.

The Ed Jones Company in Berkeley, California has been the primary contractor for the manufacture of Vallejo Police badges since at least the 1950's.  In 2003, special Anniversary badges were approved for wear by those members employed during the Department's Centennial Year.  Anniversary badges can be identified by raised badge numbers and extra engraving.  Members who are second generation Vallejo police officers have the option of including their family member's badge number engraved on the lower star point.

For many years prior to 1996, Vallejo officers wore a "CHP style" gold badge with the California State Seal in the center.   After 2003, a decision was made to return to a sterling silver "plain' design traditionally worn by many Bay Area police agencies.