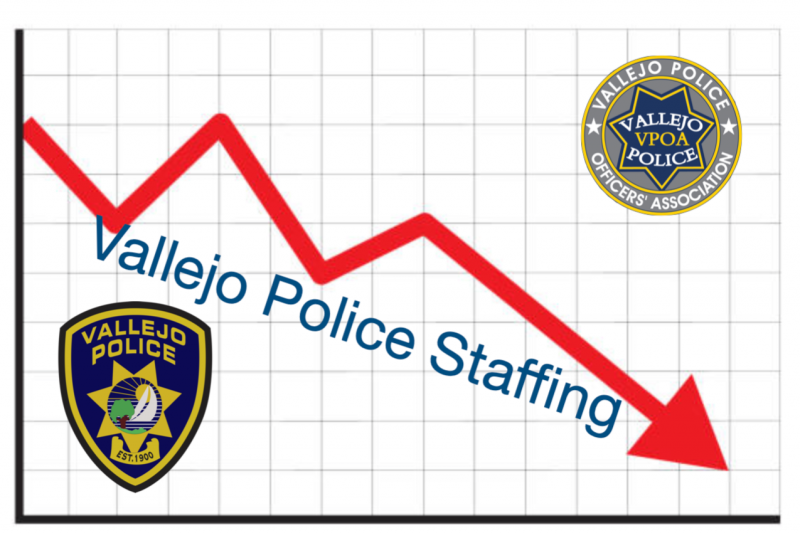 You may have read about the loss of four (4) Vallejo officers to resignation and retirement recently. This is happening at a much higher frequency as of late. Losing four officers in rapid succession (Ehman, Williams, Davis and a trainee) is a big loss. This brings staffing to a low of 84 sworn members. That is 48 officers short of VPD’s authorized strength (budgeted). 4 - 8 !

The reality is that there are not 84 working officers actually available to staff Patrol and the specialized units, 24/7. For example, one position, the Deputy Chief, was newly created and didn’t exist prior to the current Chief. And the deputy chief certainly doesn’t do any actual police work. The second reality is that we are seeing one of the highest rates of injuries among officers. There are more officers currently off (not available for full duty assignments) than in the history of the Department. Many job functions handled by police officers have been shifted to an online reporting format that likely fails to capture all crimes, as citizens are frustrated by the lack of police response and find no benefit from filing a report online. Overtime expenditures are through the roof as the City must pay the few officers remaining to fill the empty spots on the 8 Patrol beats - even after the Chief ordered Beat 3 (Glen Cove) to go without a permanently assigned beat officer. The struggle to fill 7 of the 8 Beats each day is a real hardship. It is unfortunate that the Vallejo Police Department cannot recruit and retain officers to keep staffing up - even with its two fully paid recruiters (who happen to be friends/former co-workers of the Chief) that the City has been paying for nearly two years.

To exacerbate the problem, the Chief presented a report in which he believes that VPD should have 180 officers, but we are a very long way from ever hitting that goal. If we were to aim that high, that would put us at 96 below what he said we should have!

Our officers are leaving in droves to work for other agencies in communities where they are valued for their training, experience and years of service. The VPOA hopes that we can work with the City right this ship, but are waiting for some action from City Hall to recognize these concerns.