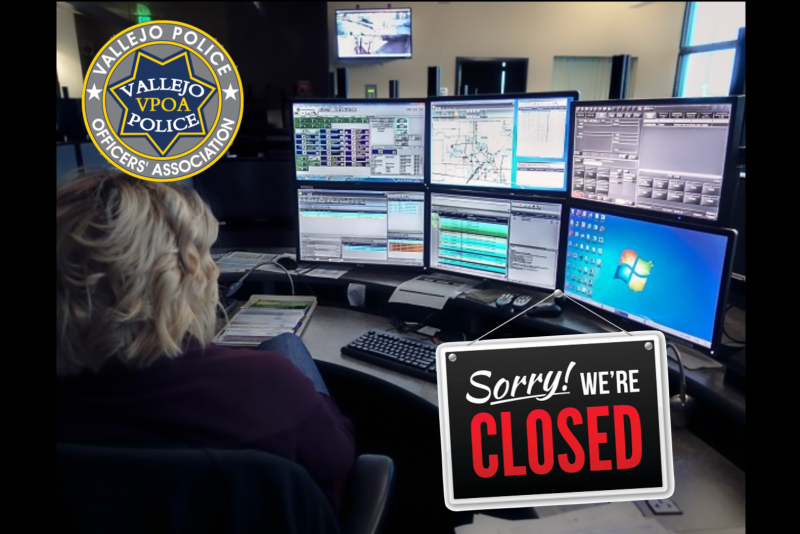 Vallejo, CA – The Vallejo 911 Dispatch Center is vital to the function and well-being of the community, and both the Police and Fire Departments.  Dispatchers field every 911 call and dispatch police, fire, and medical from this center.  On average, Vallejo’s dispatchers handle 400-500 calls per day and now routinely work with only two people in the dispatch center, not allowing for breaks or even basic trips to the bathroom.  Whereas five dispatchers per shift provide the most effective amount of resources for safe and efficient operation.

Although staffing is often an issue in dispatch centers, in early 2020, the Vallejo 911 Dispatch Center was fully staffed with the hopes of adding additional positions.  Unfortunately, in the last two years there has been a mass exodus from the center, with staff leaving to work at other agencies in the region.

This critical staffing crisis, that significantly affects both the Vallejo Police and Fire Departments, has brought the department to be within one staffed dispatcher of not being able to provide 24-hour 911 emergency services to the community.  It is believed that the administration of the Vallejo Police Department is currently considering a plan to relinquish 911 calls as well as police and fire dispatch services to another entity during nighttime hours.

The Department is set to lose another dispatcher to a nearby agency within the next few weeks, which will force the City to take this drastic action of potentially outsourcing dispatch services for the City of Vallejo or making dispatchers work mandatory 12-16 hour workdays.  Although dispatchers are not represented by the VPOA, we believe the citizens deserve to know these plans prior to them being implemented, not after.  Outsourcing these services will cause a disruption in emergency response from police, fire, and medical.  Equally as bad, forcing operators to work 16 hour days is unsustainable.

It is unacceptable and disappointing that staffing throughout the entire Department has continued to fall to critical levels placing more burden on remaining staff and lack of prompt services for the citizens of Vallejo.  These staffing issues should be addressed promptly and citizens should be properly informed of how their services may be effected by this crisis.

Please let your elected officials know that your tax dollars should not be used to outsource dispatchers to an entity outside of Vallejo that may not be invested or intimately familiar with your Community. Your safety and the safety of your police officers depends on your dispatchers.

The Vallejo Police Officers’ Association (VPOA) was incorporated in 1957. The VPOA is the recognized bargaining unit between all Vallejo Police Officers and the City of Vallejo.  Members include all ranks of officers – Captains, Lieutenants, Sergeants, Corporals and Officers.  The VPOA does not represent the Chief of Police or the Deputy Police Chiefs.  The business function of the VPOA is to protect the collective interests of the members of the Vallejo Police Department and provide benefits to its members. The VPOA is also committed to the safety and security of the citizens of Vallejo and the protection of life and property.